This study, as in the previous one, involves two linear phased-array probes in immersion and two different specimens, a rectangular block and a tube. Signal characteristics are assembled in the following table :

The surface echo on a rectangular block has been measured with the 64 element linear probe parallel to the specimen surface. Focal laws in different points located along the L0° axis, from the surface to 30 mm depth with 2.5 mm steps, are applied. On the figure here below it can be seen that some points are situated out of the piece. However, during calculation, all points are considered in the piece.

The results are calibrated from a Ø6 mm SDH, located at 150 mm depth and with a null delay law. Amplitudes of surface echoes obtained for a focal law at different depths, for three active element sequences and a water path of 25 mm are plotted in black for the measured results, in red for Kirchhoff model results and in red dotted for specular model results. 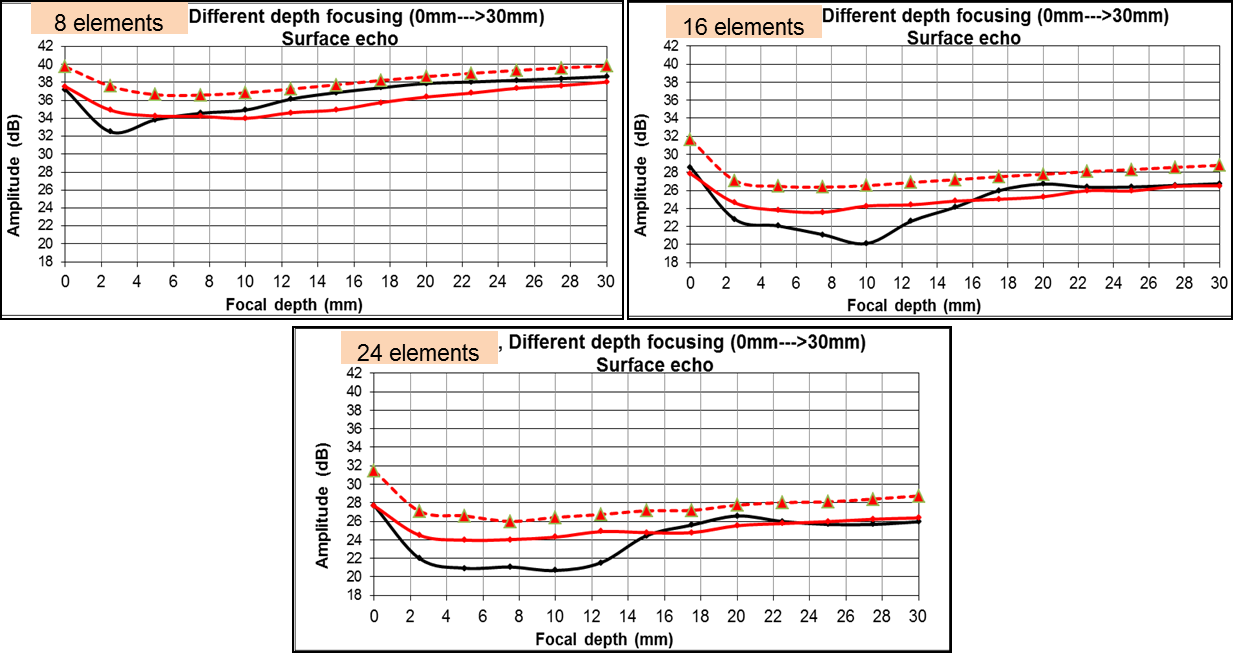 Both CIVA models predict correctly the surface echo amplitude fall when the focal point depth increases, followed by a rise. However, when the amplitude fall is observed experimentally is important, models diverge from measurements up to 8 dB, especially for cases with 16 and 24 elements between 3 and 12 mm depth. Kirchhoff and specular model curve shapes are very similar, by an offset. Specular model constantly overestimates amplitudes from 2 dB compared to Kirchhoff model.

Here below are represented Ascan comparisons between specular model and measured results.

The specimen is a tube with an external diameter of 76 mm and 7 mm width, as can be seen in the figure below. The surface echo has been measured for focal laws in different points at 0 to 20 mm depth, with steps of 2°, for a water path of 25mm and 32 active elements. 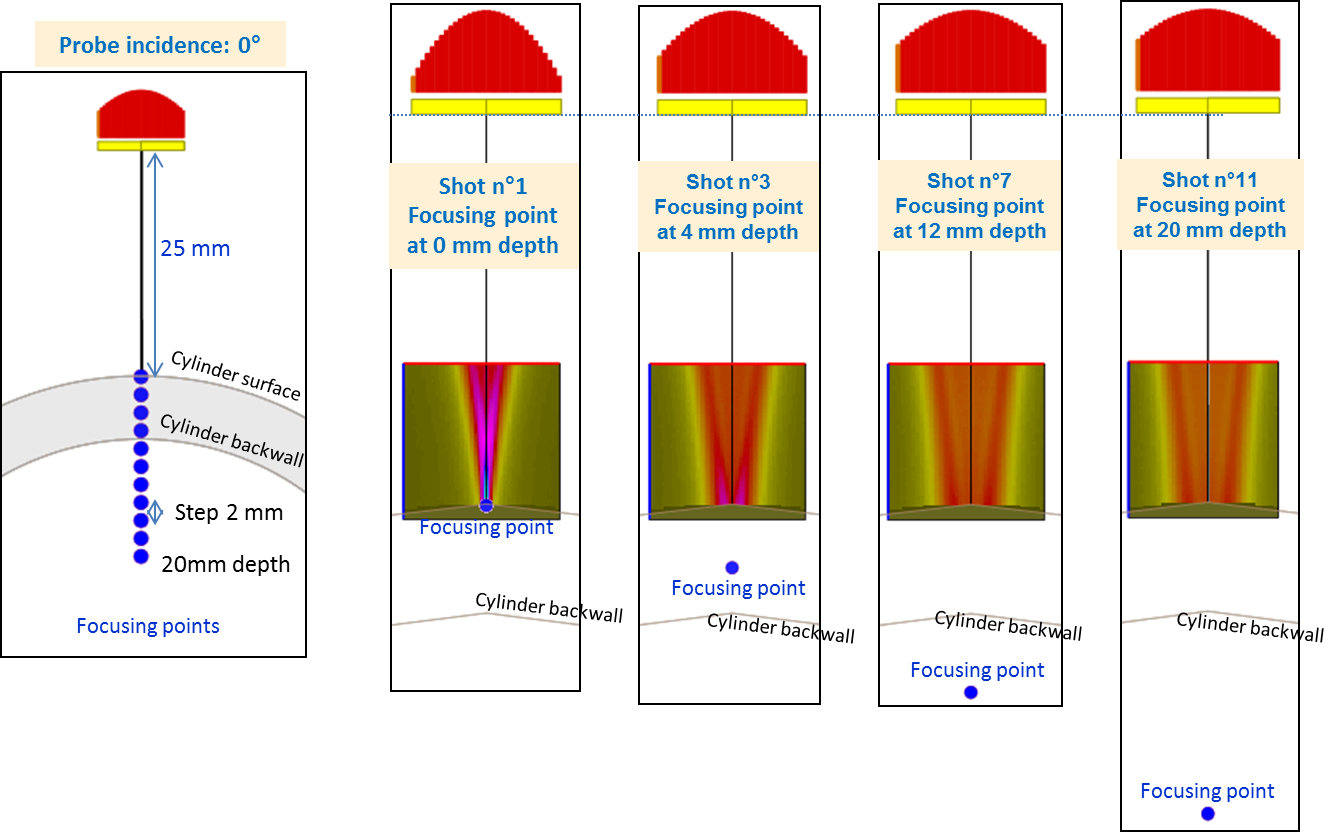 The results are calibrated from a flat surface echo and with a null angular deflection. The amplitudes of surface echoes obtained for a focal law at different depths, for 32 active elements and a water path of 25 mm are plotted in black for the measured results, in red for Kirchhoff model results and in red dotted for specular model results. 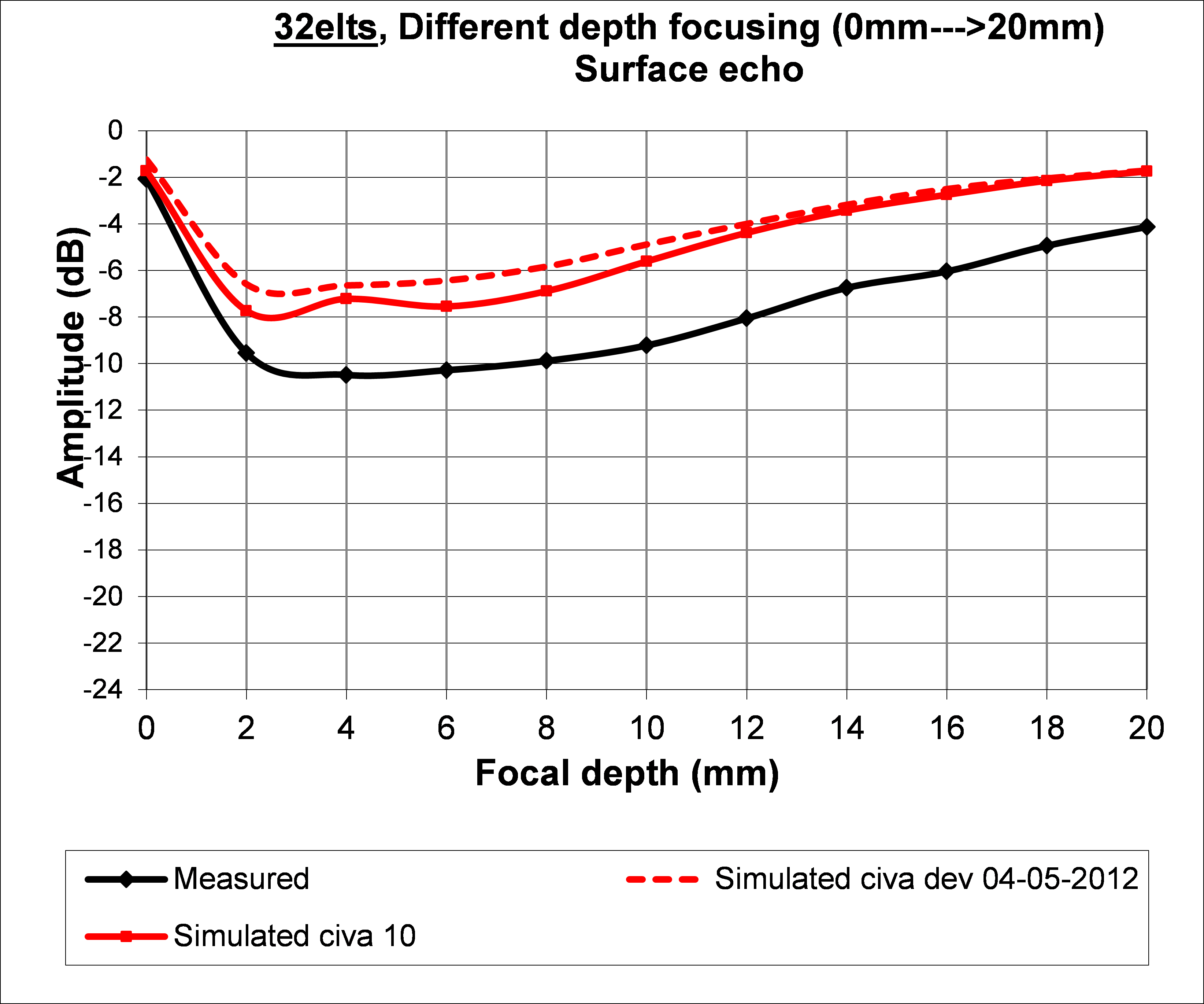 Except the focal point located on the surface, for which simulated and measured results perfectly match, both CIVA models constantly overestimate surface echo amplitude by 2 to 4 dB.

Here below Ascan comparisons are represented between both CIVA models and measured results. 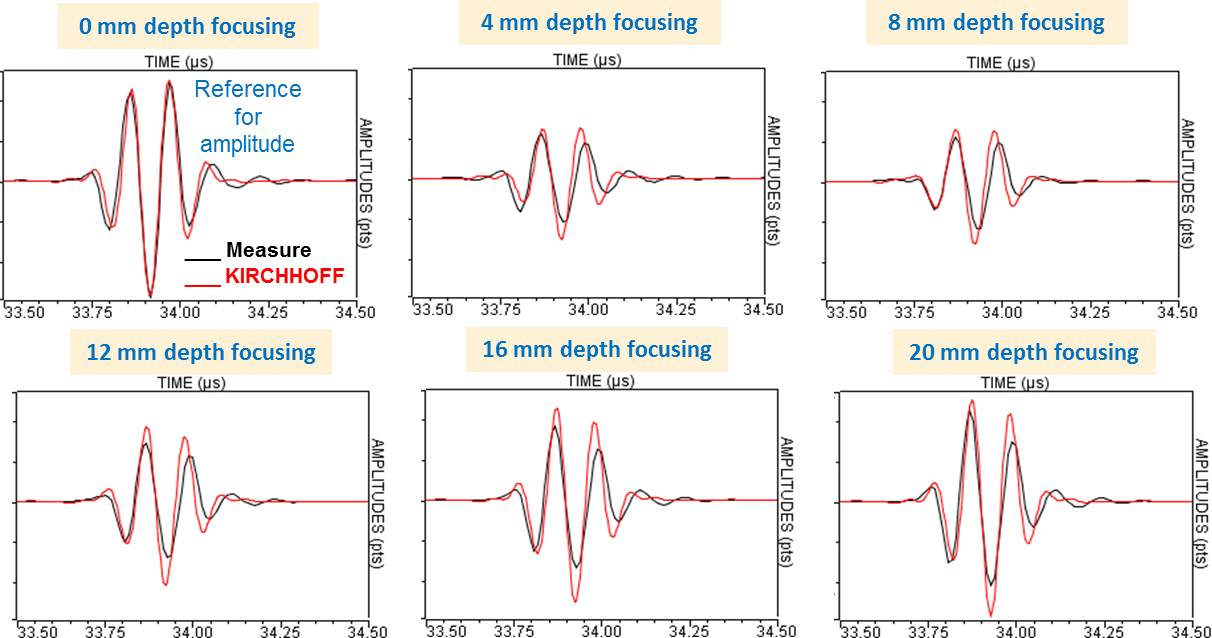 Measured and simulated echoe times of flight are quite similar.

Continue to As machined surface type

Back to surface echoes

Back to geometrical echoes