The flat piece is made out of a stacking of three layers and is inspected by the coil described previously. The first and the third ones, both of 2 mm thickness, are from the same aluminium alloy. They are separated by a very thin dielectric layer of 0.07 mm thickness. Figures below describe the inspected piece and the features of its constituting materials. 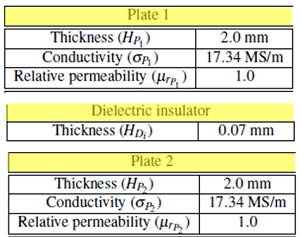 features of the 3 layers constituting the piece to inspect

Notch and two FBH present in the plate to inspect

On figures below are superimposed experimental and CIVA curves. A good agreement is observed between experiment and simulation.

From top to bottom, then from left to right hand side : Amplitude, Phase, Real part, Imaginary part. Comparisons between experimental results (black curve) and simulation results from CIVA (red curve) for the case N°2 at 1kHz (top) et 5 kHz (bottom)

Finally, the table below gathers ampltudes and phases values and confirms the very low gap between experiment and simulation, less than 1 % in amplitude and 0.5° for the phase.

Go back to MULTILAYERS - CASE N°1

Go back to MULTILAYERS