This validation case is the result of the study of a working group of COFREND (French Confederation for Non-Destructive Testing). This group "modeling of Eddy currents" aims at proposing benchmarks gathering simulations and experiments results allowing the validation of Eddy currents simulation codes.

A flat plate in inconel, 1.55 mm thickness, is inspected by two coils, as it is represented on figure below. The plate material, the inconel, has a conductivity of 1.02 MS.m-1 and a relative permeability of 1.

This study implies a probe made out of two coils operating in separate functions and absolute measurements, that means in "Reflection mode". Geometrical features of the coils including a ferrite, as well as their positionning, are described on figures below. 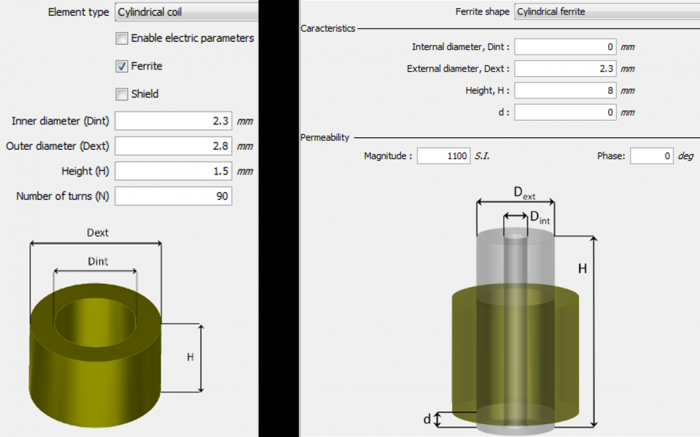 Features of the coils constituting the probe with separate fonctions. 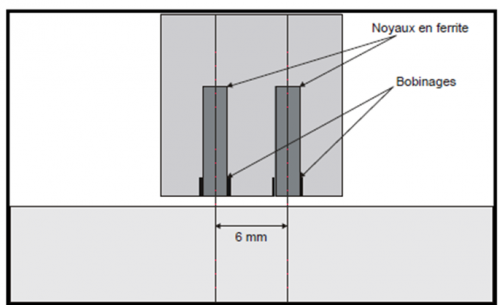 The comparison is carried out on the flaw called « F5 » on figure below, une small through notch of 2 mm lentgh and 0.1 mm aperture, after calibration on flaw « F7 », notch of 10 mm lentgh, 0.3 mm aperture, situated at 40% of the plate thickness. The signal is setted at 1V amplitude and 0° phase on calibration flaw. 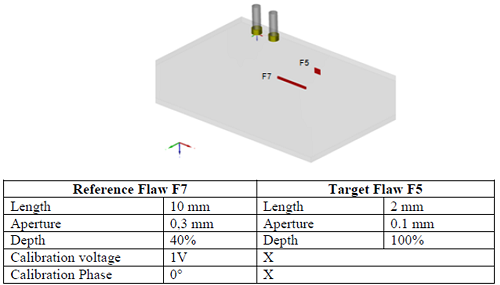 This benchmark has been carried out with the semi-analytical software CIVA_ET version 11.0

A specifical surface model (Boundary Element Method), more efficient and more accurate than a volume model for thin flaws has been used in this study.

Both tables below gather calibrated results for the « F5 » calibrated flaw at 100 kHz and 300 kHz. The figure on the bottom of this page shows results curves obtained with CIVA and the experiment. A good agreement is observed between simulation and experiment.

Experiment and simulation results at 100 kHz

Experiment and simulation results at  300 kHz

CIVA simulation results were also compared with the results of two finite element codes: C3D, developed by LAMEL (joint laboratory between EDF R & D and the University of Lille) and Flux 3D, developed by Altair. The amplitude and phase differences are given in relation to the experimental results.

Comparisons between CIVA, C3D and Flux for channels at 100 and 300 kHz

The agreement is satisfactory between the 3 codes and the experiment with a difference less than 10% for all the cases.

These results are taken from the article Working Group COFREND "Eddy Current NDT modeling": benchmarks for validation and improving simulation codes acceptation presented to the ECNDT in 2014.