The diameter of the probe defined in CIVA is the one given by the manufacturer:

The central frequency of the input signal is the nominal frequency given by the manufacturer:

The two other parameters of the input signal, the bandwidth and phase, are determined by fitting the temporal shapes of the measured and simulated echoes from a reference reflector which CIVA predictions have been validated.

The reference reflector chosen for this probe is a SDH of diameter D = 2mm located at 44mm depth in a steel calibration block. This reference echo has been measured for a water depth of 20mm.

The bandwidth and the phase of the signal are (Figure 14):

Figure 14 : Superposition after ajustment dof the bandwidth and phase of the signal of experimental  A-scans ans simulated ones with COMPLETE_SOV of a Ø2mm SDH located at 44mm depth, waterpath 20mm. Normalized amplitudes. Flat probe Ø6.35mm, 2.25MHz.

The inclusions diameters defined in CIVA are the ones provided by the manufacturer:

Longitudinal and shear waves velocities in the inclusions couldn't be measured precisely. However, they were determined thanks to a small parametric study with CIVA by using the fact: 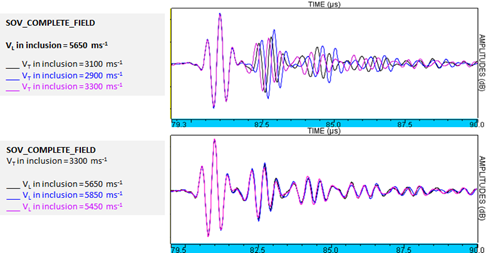 Thus, the speed of T-waves in the inclusion is determined by adjusting the temporal positions of the echoes arriving after the first experimental and COMPLETE_SOV simulated specular echo (Figure 16, top).

The value that has been obtained is: 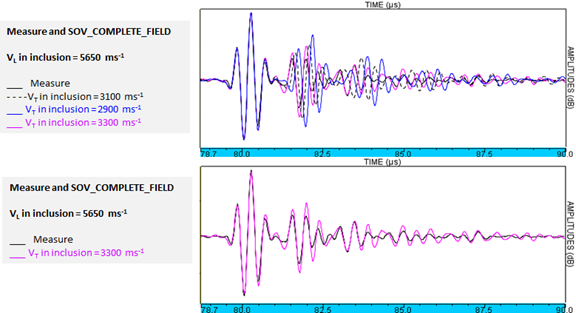 Note : the SOV and COMPLETE_SOV models simulate the same echoes after adjustment (Figure 17). The determined velocity does not depend on the chosen model for simulation.

Figure 17 : Superposition of A-scans simulated with SOV and COMPLETE_SOV models of the echo of the Ø2mm inclusion placed at 60mm from the probe. We can see that the specular echo and the following ones do not depend of the model. Flat probe, Ø6.35mm, 2.25MHz.

Then, the L wave velocity in the inclusion was determined by adjstment of the amplitude of the simulated and experimental amplitude echo following the first specular echo (Figure 18 top).

The value that was obtained is (Figure 18 bottom): 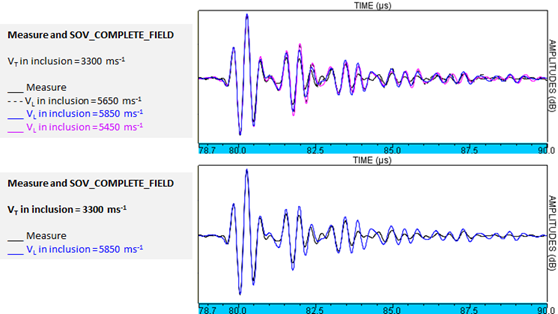 The L and T wave velocities that were determined for the Ø2mm inclusion were used as input data in CIVA for the other inclusion beacuse we suppose that they are identical.

Note: this method for determining the L and T waves velocities in the inclusion is not very accurate and makes the assumption that COMPLETE_SOV model predicts accurately the echoes following the specular one whereas this model is still being validated. Nevertheless we kept this adjustment because it has no consequence for the rest of the study since it concerns the  inclusions specular echo which do not depend on the values of these speeds.

This velocity was measured sing the successive bounces of a surface echo on an infinite plan.

REfErence FOR THE AMPLITUDES FOR EXPERIMENTS VS SIMULATED AMPLITUDES

The reference amplitude for comparison experiment/simulation results is the amplitude of the L0 ° specular echo  of the Ø2mm SDH located at 44mm steel depth in the steel calibration block inspected with a waterpath of 20 mm (Figure 14). The amplitudes of the echo obtained with the SOV and COMPLETE_SOV models are almost identical, the same point value was used as reference for the amplitudes for both models (Figure 19).

Figure 19 : Superposition of A-scans simulated with SOV and COMPLETE_SOV of the reference SDH located at 44mm depth in the steel calibration block, waterpath 20mm. It shows that both models predict simular echoes. Flat probe of  Ø6.35mm, 2.25MHz.

Figure 20 and  Figure 21 here below show the simulated field emitted by the probe in watter.

The maximal amplitude emitted by the probe is at 15.5 mm  distance form its axis. At this point, the -3dB focal spot width measures 1.9 mm and increases on each size (Figure 20).

Figure 20 :  CIVA simulations of the field emitted by the probe in water. On the top: field profile along the probe axis showing a maximum at a distance of 15.5 mm from the probe. On the bottom: field cartographies (6mmx6mm) in planes perpendicular  to its axis at different  probes distances. Comparable amplitudes (ref=maximal field amplitude obtained at D = 15.5 mm). Planar probe  Ø 6.35 mm, 2.25 MHz.

Figure 21 : CIVA simulations of the field emitted by the probe in water. Inclusions representations with the same scale as the one of the field cartography in order to compare their dimensions to the focal spot dimensions. Planar probe Ø6.35mm, 2.25MHz.

The experimental amplitude/distance echodynamic curves are presented on Figure 22. On the top, the amplitudes are relative to the reference echo amplitudes, on the bottom they are normalized: 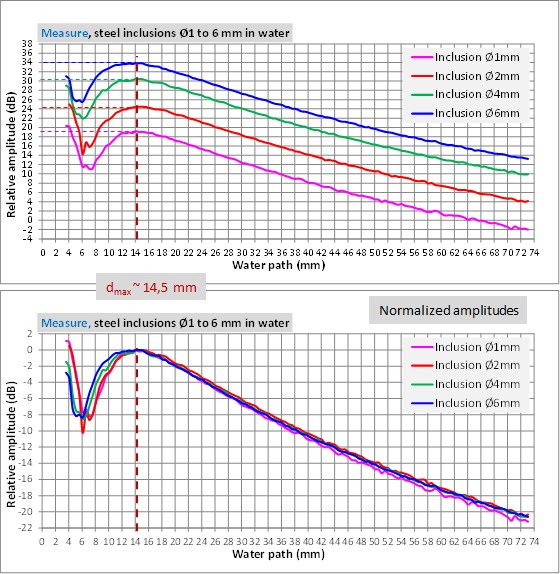 Figure 22 :  Experimental results showing the evolution of the amplitude/distance echodynamic curves with the steel inclusions diameters (from 1 mm to 6 mm). On the top: comparable amplitudes, reference: L0° echo of a Ø2 mm SDH at 44 mm depth in the calibration block in ferritic steel, water path 20 mm. On the bottom: normalized amplitudes.  Ø6.35 mm plane probe, 2.25 MHz.

The experimental XY curves obtained for the 4 inclusions are presented on Figure 23 (normalized amplitudes). The focal spot width does not depend on the inclusion diameter. 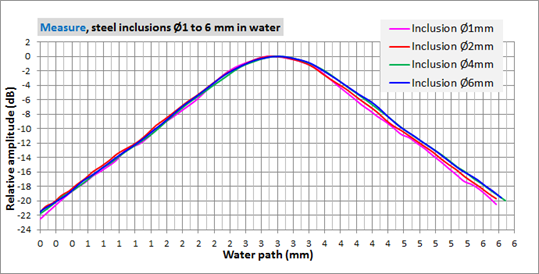 Figure 23 : Experimental results showing the evolution of the XY curves at the experimental focal distance with the steel inclusions diameters (from 1 mm to 6 mm).  Normalized amplitudes.  Ø6.35 mm plane probe, 2.25 MHz.

The specular echoes shape of the inclusions located at a focal distance of 14.5 mm or in the probe far field (60mm) do not depend on the inclusion diameter (Figure 24). The echo coming after the first contribution is even more far in time from the first echo than the inclusion diameter is great. The origin of the echoes appearing after the specular contribution is not accurately known, it appears a mix between the creeping waves and the waves penetratingthe inclusion in which they propagate, rebound with eventually modes conversions, interfere ...

Figure 24 : Experimental results showing the A-scans evolution with steel inclusions diameters (from 1 mm to 6 mm), probe/inclusion distance = 14.5 mm on the left hand side and 60 mm on the right hand side. Normalized amplitude. Ø6.35 mm plane probe, 2.25 MHz

The comparisons of the measured and with SOV, COMPLETE_SOV and SPECULAR simulated amplitude/distance curves are presented Figure 25 (Ø1 mm and Ø2 mm inclusions) and Figure 26 (Ø4 mm et Ø6 mm inclusions) 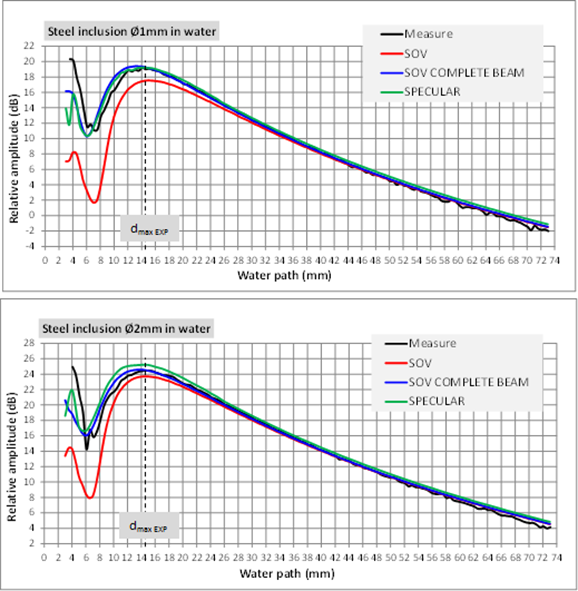 Figure 25 : Comparison of measured and  with SOV, COMPLTE_SOV and SPECULAR simulated amplitude/distance curves, Ø1 mm et Ø2 mm inclusions. Reference for the amplitudes: L0° echo of a Ø2 mm SDH at 44 mm depth in a ferritic steel calibration block, 20 mm water path. In non restricted CIVA, the SOV and COMPLETE_SOV models are allowed for the Ø1 mm and Ø2 mm inclusions. Ø6.35 mm plane probe, 2.25 MHz. 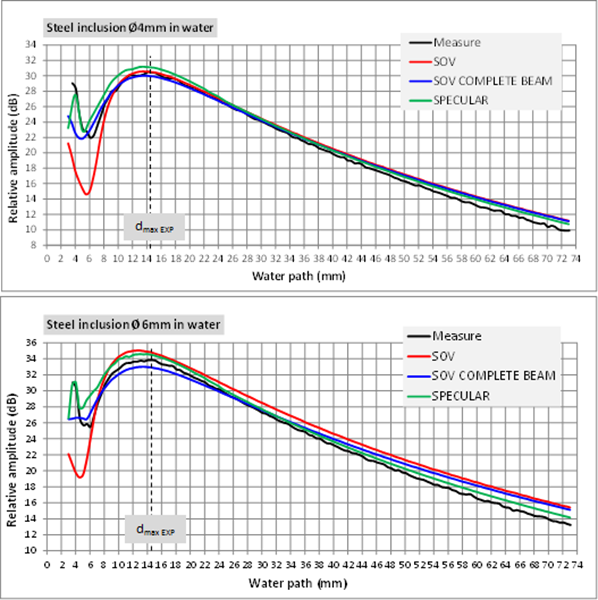 Figure 26 : Comparison of measured and  with SOV, COMPLETE_SOV and SPECULAR simulated amplitude/distance curves, Ø4 mm et Ø6 mm inclusions. Reference for the amplitudes: L0° echo of a Ø2 mm SDH at 44 mm depth in a ferritic steel calibration block, 20 mm water path. In non restricted CIVA, the SOV and COMPLETE_SOV models are allowed for the Ø4 mm inclusion and  the SPECULAR model is allowed for the Ø6 mm inclusion. Ø6.35 mm plane probe, 2.25 MHz.

COMPLETE_SOV and SPECULAR Models : a very good agreement is obtained with the experiment for the 4 inclusions at every distances. The differences do not exceed 2 dB except for small distances. « dmax » positions are well predicted for those 4 inclusions.

SOV Model: the agreemnt with the measure is not so good as for the 2 previous models when the inclusions are close to the probe. 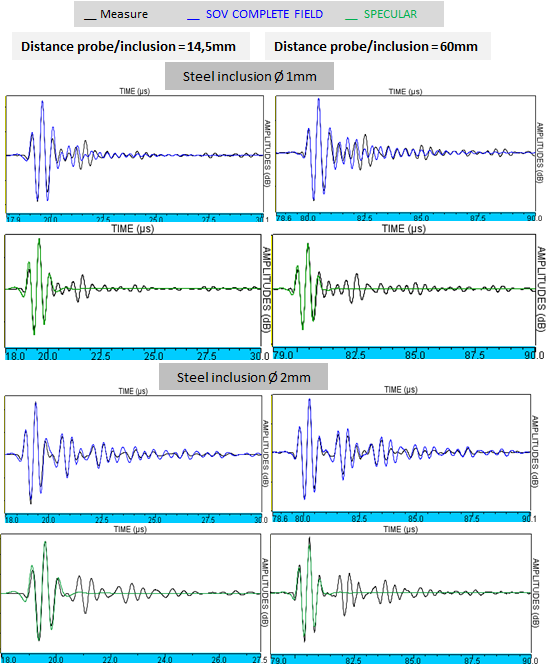 The XY experimental and with SOV, COMPLETE_SOV and SPECULAR simulated echodynamic curves, extrated at the probe/inclusion distance of 14.5 mm (experimental focal distance) as well as the -6 dB focal spot width are close (see figure here below). 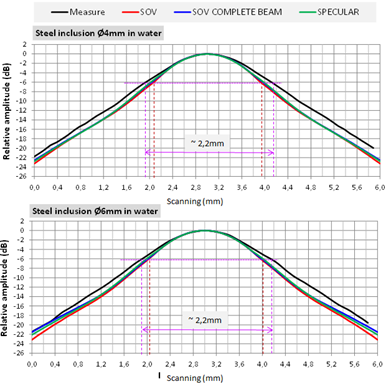 Results obtained with the infinite plan

The comparisons of the amplitude/distance curves of the infinite plane, experimental ant with SPECULAR and KIRCHHOFF models, show a very god agreement (Figure 29).

The experimental and with SPECULAR models predicted A-scans in the infinite plane are in very good agreement (Figure 30). 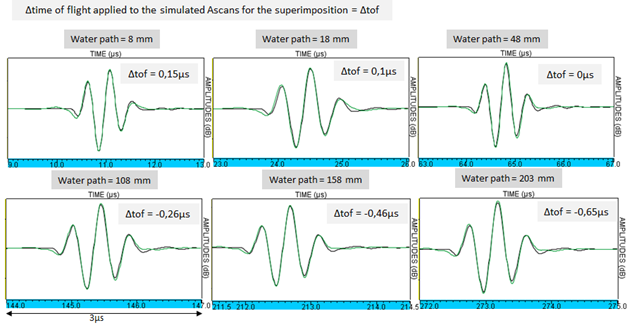 Here are compared the characteristcs (central frequency « fc » and bandwidth « BW ») of measured and with SPECULAR model simulated spectra od the infinite plane at 14.5 mm (focal distance) and 60 mm (far field) in order to verify that CIVA correctly predict them. Results are gathered on the Table 5.

NB :  the bandwidth indicated in MHz in the tables below is the spectrum width at the half of its maximum.

Tableau 5 : Comparisons of characteristics from measurement  and with SOV, COMPLETE_SOVand SPECULAR simulated results (central frequency fc and bandwidth BW) of the specular echoes spectrum of the infinite plane in water at 14.5 mm and 60 mm from the probe. The values written in bold correspond to the non restricted cases in CIVA.
Ø6.35 mm plane probe, 2.25 MHz.

The same extracted experimental and simulated characteristics of inclusions echoes spectra have been compared with the characterictics from the infinite plane. The Table 6 shows an example of  Ø1mm inclusion results.

Tableau 6 : Comparisons of characteristics from measurement  and with SOV, COMPLETE_SOV and SPECULAR simulated results (central frequency fc and bandwidth BW) of the specular echoes spectrum of the Ø1mm steel inclusion  in water at 14.5 mm and 200 mm from the probe. The values written in bold correspond to the non restricted cases in CIVA.
Ø6.35 mm plane probe, 2.25 MHz.

Those results show that CIVA correctly predicts the central frequencies and bandwidths of the echoes of the infinite planes in both inclusions. The values do almost no depend on the reflector.

EFFECT OF small CHANGEs IN the central frequency

It has been evaluated the effect of an arbitrary variation of +/-0.1 MHz of the centrale frequency « fc » of the entry signal (almost 5 % of the probe nominal central frequency) on the CIVA predictions for the inclusions and the infinite plane.

Before studying this effect on the inclusions echoes and infinite plane, the experimental/simulated good agreement for the SDH reference echo for the three evaluated frequencies (2.2 MHz, 2.3 MHz and 2.4 MHz) has been verified because it is essential to allow the measure/simulation comparisons for other reflectors.

The reference echo A-scans (SDH) simulated at the three frequencies are in agreement with the measure (Figure 31).

In the same way, the reference SDH amplitude (at 44 mm depth) varies a little bit with the central frequency: almost 0.5 dB (Figure 32). 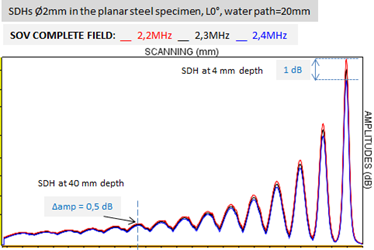 Figure 32 : COMPLETE_SOV simulation results, SDH L0° echoes at different depth (from 4 mm to 60 mm by 4 mm steps) in the calibration block. Study of the effect of  a low central frequency variation on this curve calculated for three frequencies: 2.2 MHz, 2.3 MHz and 2.4 MHz. Ø6.35 mm plane probe, 2.25 MHz.

The inclusions ampitude/distance curves has been simulated at the 3 central frequencies  « fc » with the COMPLETE_SOV models for the Ø1, 2 et 4 mm inclusions (Figure 33) and SPECULAR model for the Ø6 mm inclusion (Figure 34).

Figure 33 : COMPLETE_SOV simulation results, amplitude/distance curves of steel inclusions in  water. Study of the effect of a low variation of the central frequency on the curves obtained for 3 frequencies: 2.2 MHz, 2.3 MHz and 2.4 MHz. Ø6.35 mm plane probe, 2.25 MHz. 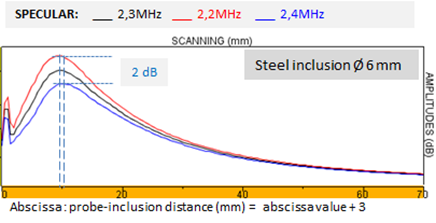 Figure 34 : COMPLETE_SOV simulation results, amplitude/distance curves of the Ø6mm steel inclusion in  water. Study of the effect of a low variation of the central frequency on this curve obtained for 3 frequencies: 2.2 MHz, 2.3 MHz and 2.4 MHz. Ø6.35 mm plane probe, 2.25 MHz.

Those results show the a probe central frequency variation modifies the maximal amplitude of the amplitude/distance curves by 2 dB to 2.5 dB. However, when the inclusions move away from the probe, the amplitudes of their echoes vary a little with fc.

Also, if the CIVA entry signal central frequency is modified by 0.1 MHz, the maximal amplitudes of the inclusions amplitude/distance curves can vary by almost 2 dB if the reference for the amplitudes is the SDH at 44 mm depth. Moreover, the amplitude/distance curve maximal position varies by 1.5 mm. Those variations can be considered as uncertainties on CIVA simulation results related to the value uncertainty of the entry signal of the central frequency.

A very good agreement has been obtained for this probe between the measures and with COMPLETE_SOV and SPECULAR simulations for:

Back to simulations results

Continue to Results obtained with the 5 MHz probe