The probe used for these measurements is a circular contact probe of Ø12.7 mm diameter and transmitting P45 waves. The transmitted signal has a frequency of 2.25 MHz, a bandwidth of 50 % and a phase of 280°.

The figure below corresponds to B-scans obtained experimentally and with simulation: 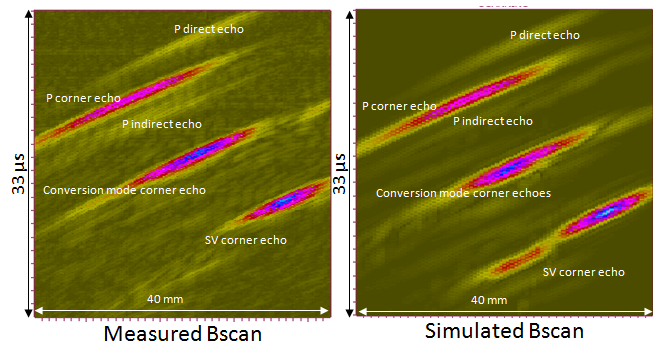 P, SV and conversion mode corner echoes appear on the B-scans. Direct and indirect diffraction echoes can also be identified. The corner echoes associated with mode conversion are also called mixed corner echoes. In the simulated B-scan, the SV corner echo is split in two contributions. The splitting is analyzed here.

The figure below shows the paths associated with each of these contributions:

The B-scan can be reconstructed according to the P or SV waves path:

The following results are calibrated relatively to a SDH of Ø2 mm and located at 37 mm depth.

A similar configuration is studied. It involves a planar steel specimen of 47 mm thickness containing a backwall breaking notch of dimensions 10×15 mm.

The results are calibrated relatively to a SDH of Ø2 mm located at 44 mm depth. They are displayed in the table below:

There is a good agreement between experimental and simulated amplitudes of P and mixed corner echoes.

The SV corner echo amplitude is slightly over-estimated by CIVA and presents on the B-scan two main contributions. However, this has very few consequences on the main contribution since the difference is only 2 dB and because the echo is well positioned on the Bscan. As for the beam splitting phenomenon, it is studied here.

Continue to Influence of the notch height