Corner echoes with P mode: Influence of the notch height

The experiment is performed with a circular immersion probe of Ø12.7 mm diameter with a waterpath of 25 mm and transmitting P45 waves. The transmitted signal has a frequency of 2.1 MHz with a bandwidth of 61 % and a phase of 0°.

Some examples of experimental and simulated Bscans are displayed below: 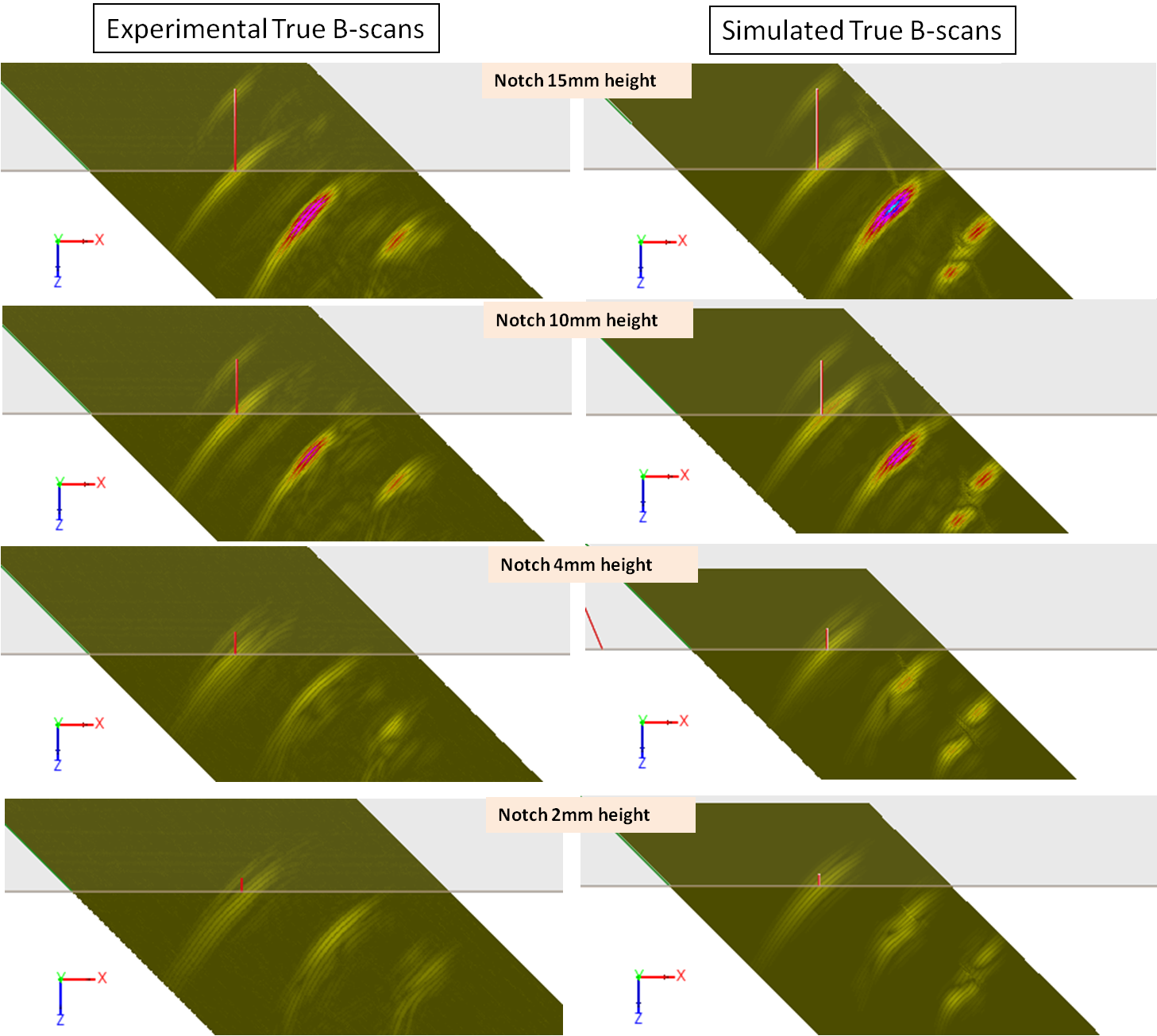 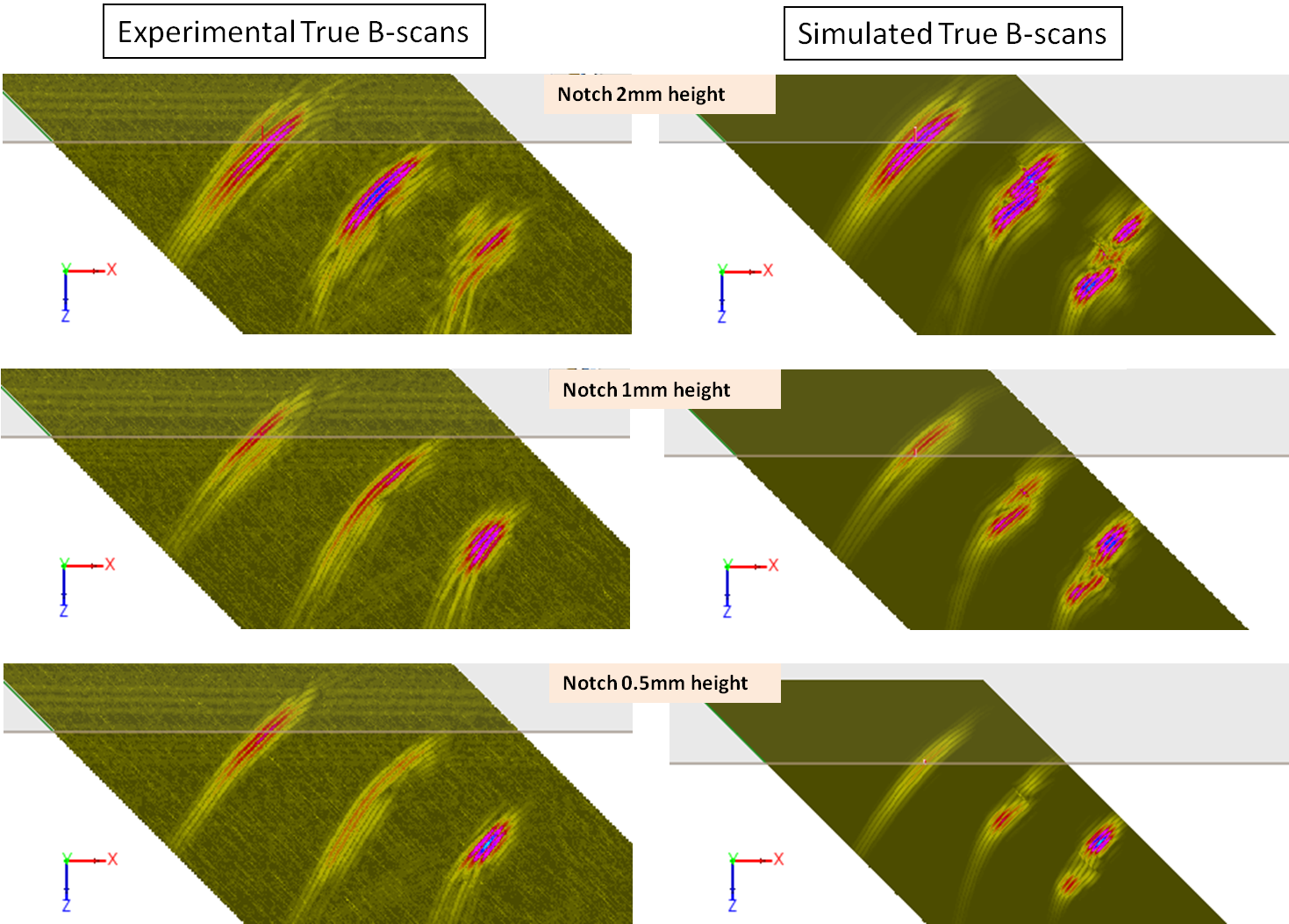 On the figure above, a dynamic modification of 12 dB has been applied for the smallest notches (from 2 mm to 0.5 mm) in order to improve the visibility of the echoes on the Bscans. Corner echoes associated with P, SV and mixed modes can be seen on the Bscans. Direct and indirect corner echoes are also identifiable.

On the Bscans above, it can be observed that, in simulation, the SV corner echo is splitted in two. This splitting occurs for the smallest notches and for mixed corner echoes. Its origins is known and explained here.

For bigger notches, the mixed corner echo presents the largest amplitude compared to the other echoes. The reason is that it is composed of two possible contributions/paths which are superimposed as illustrated by the figure below:

The following results are calibrated relatively to a SDH of Ø2 mm, 95 mm long and located at 20 mm depth. 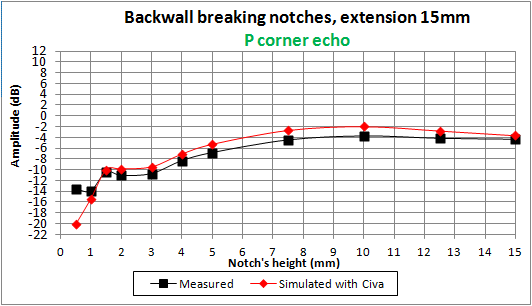 There is a good agreement between experimental and simulated P corner echoes amplitude except for the 0.5 mm height notch for which there is 6 dB difference.

For the notch of 0.5 mm height, there are possible explanations:

Mixed corner echo amplitude relatively to the notch height can also be analyzed: 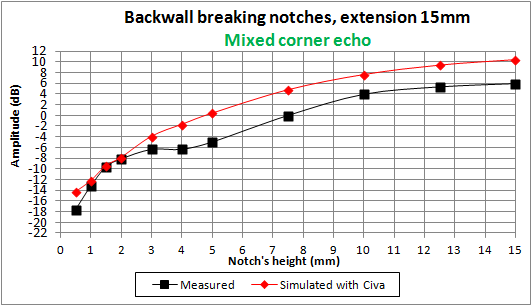 On the figure above, the experimental amplitude to the notch height curve shows differences with the one obtained with simulation. CIVA over-estimates (about +4 dB) the mixed corner echoes amplitude of notches which are between 4 to 15 mm height. However, the increase in amplitude with the notch height is well predicted. 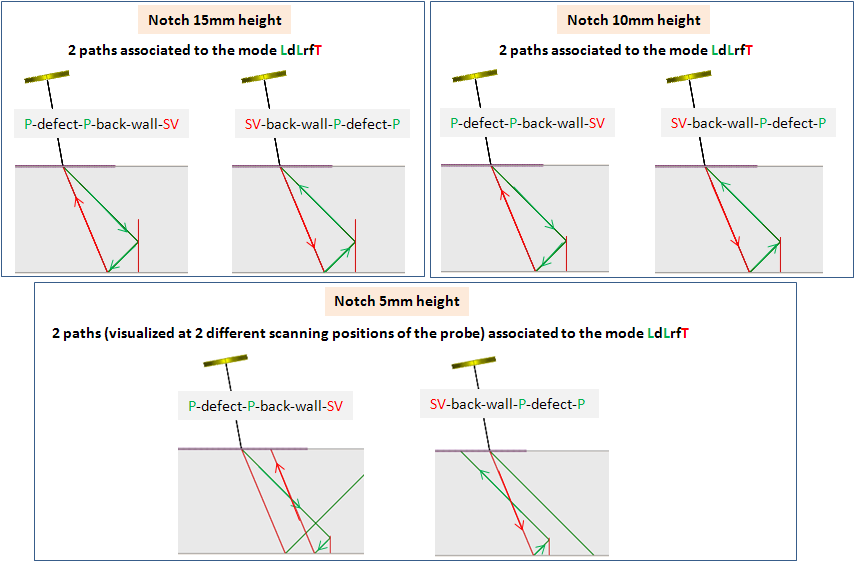 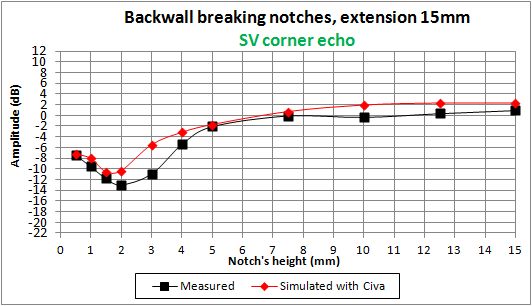 A good agreement between the experimental and simulated SV corner mode echoes amplitudes for the smallest and the highest notches can be observed. The shape of the curve is also well predicted by CIVA: decreasing until the height 1.5 mm then increasing. Differences can be noted for notches of 2, 3 and 4 mm height. This could be due to the simultaneous effect of the SV beam splitting with the notch height. For the moment, no other additional investigation has been carried out.

Continue to Influence of the refraction angle