UT - FBH: Conclusion and discussion about the limitations

An overall good agreement is observed between simulated results using Kirchhoff interaction model and experimental measurements. The agreement is particularly good for P0° and P45° inspections with immersion probes at 5 MHz.

DISCUSSION ABOUT THE LIMITATIONS

However, some discrepancies with experimental results are observed and enlighten some phenomena:

Discrepancies between simulations and experiments notably occur in the case of configurations characterized by small depth and great aperture probes (example: 12.7 mm at 4.6 MHz, 19 mm at 4.6 MHz). The near field limitation is due to the fact that the incident beam is approximated by an overall given wave shape and time of flight. This is not an available description in the near field area which is subject to interference phenomenon. The following illustration represents field computation results. Interferences scheme are visible in the computation zones situated at the lower depths (lower than the probe near field zone). 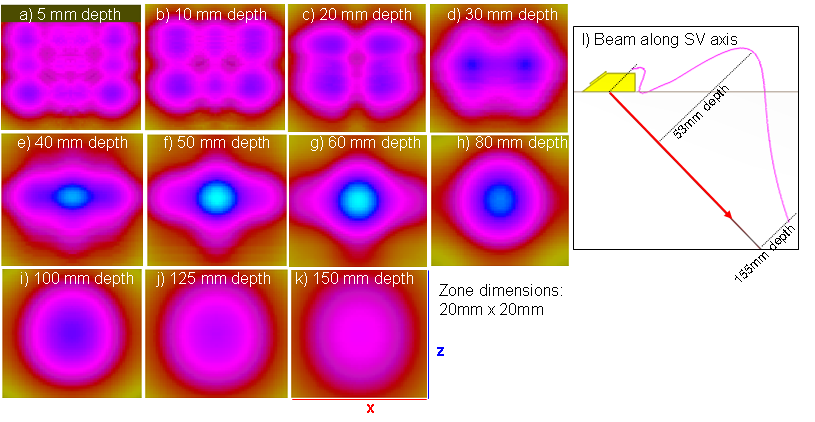 The Kirchhoff interaction model limitation, or “small defect” limitation, has to be taken into account when the flaw dimensions are small compared to the probe wavelength, which generally corresponds to low frequencies. Theoretically, the flaw must respect the following dimensions: ka >> 1, with k the wave number, a the flaw dimension and λ the beam wavelength. As the relation between k and λ is: k=(2 π)/ λ, the minimal flaw size is a= λ/(2 π). So, for the P wave inspections at 2 MHz, the minimal flaw size is 0.5 mm while it is 0.2 mm at 5 MHz. In the study carried out here, it is observed that the discrepancies between CIVA and experiments are greater than 2 dB mostly for the smaller FBH, that means the 1 mm ones (examples: 19 mm à 2.25 MHz, 19 mm à 4.6 MHz, 6.35 mm à 5 MHz).

Back to Flat Bottom holes

Back to Calibration defects