What CIVA brings to NDT

The simulations accessible through CIVA software allow for an optimized choice of an inspection procedure. The software lets you take into account most influential parameters involved during an inspection, regarding the transducer, the geometry or the material of the inspected specimen, but also the sought after flaws. Through tweaking all these parameters, it is then possible to determine the most appropriate method for the inspection, or to evaluate the performance and relevance of an existing procedure.

Simulation is a major cost reduction asset. The ability to vary the parameters of an inspection (having control over them) enables you to anticipate the inspection from the design stage of a component, or to minimize the number of mock-ups to demonstrate the performance of an inspection. Parametric studies are now even more powerful and revolutionized thanks to metamodels that give access to a huge amount of testing scenario in real time and will greatly help for sensivity analyses. CIVA can also calculate POD (Probability Of Detection) curves, based on taking into account several uncertain entry parameters, which play a major role in the context of MAPOD (Model Assisted POD) to support POD experimental campaigns in order to improve their reliability and reduce their cost. Moreover, the design process of a transducer can be guided by simulation tools, especially when it involves Phased Array or EMAT technologies. 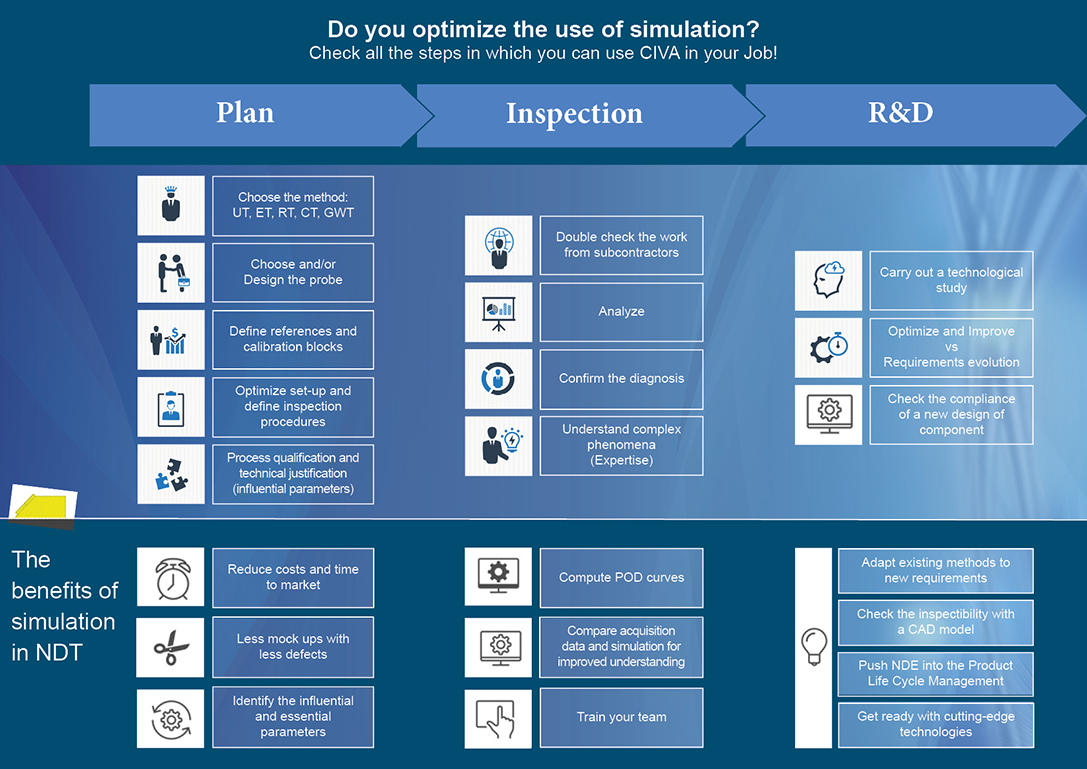 The application fields of CIVA are numerous.

CIVA is used in the Nuclear industry by most major stakeholders in the world, from France to South Korea, through the U.S.A., China or Japan. Designing new inspections, implementing innovative solutions with the help of Phased Array transducers, performance demonstration or qualification process, CIVA is a key tool to bring together technical optimization and cost reduction.

Aeronautics is another field in which CIVA also brings profitable solutions. Taking into account complex materials, the possibility to predict the behavior of the method on specimens with varied geometries, the considerable span of transducers and probes available give engineers and inspection designers an asset that quickly becomes essential.

In other fields such as transportation, metalworking, aerospace, oil & gas, CIVA not only brings a technical solution, allowing for a better understanding of complex phenomena, but CIVA is also and above all else a means to reduce costs.

The CIVA Software platform includes three of the major Non Destructive Testing methods, as well as two more specific ones:

The philosophy of CIVA Software is first to offer its users the greatest ease of use possible in a context as close as possible to their industrial context. Thus, whichever the involved method, CIVA enables for the definition of an inspection configuration via intuitive graphical interfaces which are trade-oriented. These graphical interfaces synchronized with 3D visualization tools allow the user to configure in a very simple and visual way the selected inspection method, the specimen to be inspected and the transducer chosen to perform the inspection. After having implemented the flaw(s) sought after in the inspected specimen, then defined the inspection area, the inspection can be performed by running the simulation computation.