Tube inspection with an encircling coil

This validation case is the result of the study of a working group of COFREND (French Confederation for Non-Destructive Testing). This group "modeling of Eddy currents" aims at proposing benchmarks gathering simulations and experiments results  allowing the validation of Eddy currents simulation codes.

A stainless steel tube with a conductivity of 1.43 MS / m and a relative permeability of 1 is inspected with an encircling coil. The tube has an outer diameter of 32 mm and a thickness of 8 mm.

The probe operates in separate transmission and reception. It consists of an emitting encircling coil and two receiver encircling coils separated by 2 mm, whose geometrical properties are gathered in the figure below, representing the panel in CIVA in which  these properties have to be defined. The acquisition is carry out at a frequency of 50 kHz, with 1mA injection and a differential reception. 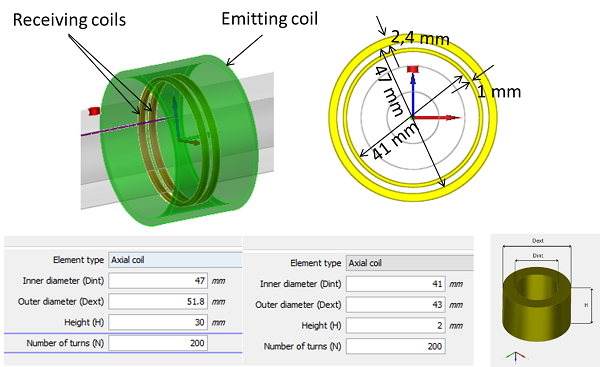 The piece contains 4 flat bottom holes (FBH) with a diameter of 3.5 mm and different depths, as shown in the figure below,  the last FBH being through. 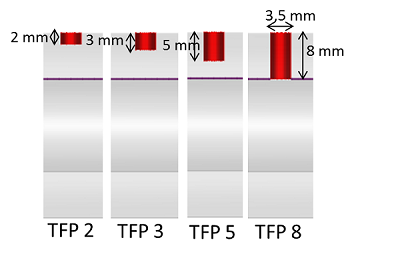 FBH at different depths in the inspected tube

The simulations are calibrated from the FBH of 3 mm depth. We thus present the comparison results  between CIVA and the experiment of FBH 2, 5 and 8 (through). 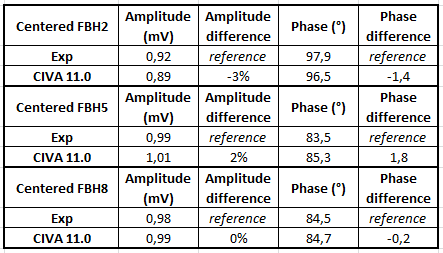 Comparison results between CIVA and the experiment for centered probe

CIVA  and experiment Lissajous curves  are plotted and superimposed below for each FBH: 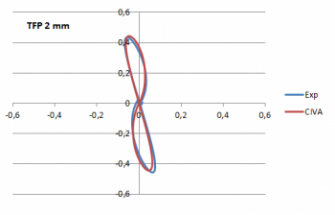 Superimposition of the Lissajous obtained with CIVA and the experiment

These Lissajous curves confirm the good agreement CIVA / experiment observed in the table of comparisons.

The CIVA simulation results were also compared with the results of the  finite element code Flux 3D, developed by Altair. The amplitude and phase differences are given in relation to the experimental results. 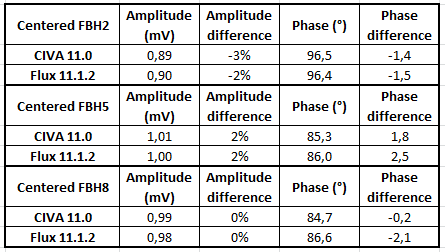 Comparison results between CIVA and Flux 3D for  centered probe

The results obtained with the off-centered coil with respect to the axis of the tube are gathered in the table below. In this case only the CIVA and Flux codes are compared, there are no experimental references but the previous results show that the  simulations results are reliable compared to the experiment. 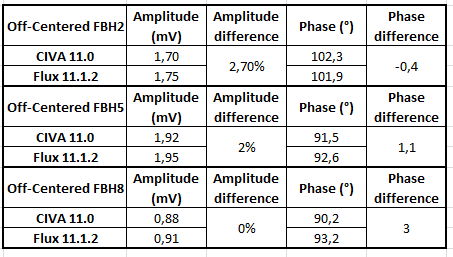 Comparison results between CIVA and Flux 3D for  off-centered probe

These results show that CIVA and Flux are in agreement, with a maximum of 3% difference in amplitude and 2.5 ° in phase.

These results were published at the ECNDT congress in 2014 article in the Working Group COFREND "Eddy Current NDT modeling": Benchmarks for validation and improving simulation codes acceptation.

Go back to TUBE INSPECTION WITH A ROTATING PROBE

Go back to TUBES